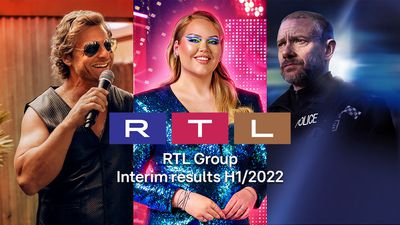 “RTL Group continues to deliver on its targets for its growth businesses of streaming and content.”

“RTL Group had a solid first half of the year 2022, despite the growing economic uncertainties resulting from the war in Ukraine, increasing inflation and supply chain issues. Thanks to our investments into streaming and content and the strong performance of RTL Nederland, our first-half revenue reached a new record level of €3.3 billion. Despite significantly higher streaming start-up losses and a slowdown of the TV advertising markets since March, RTL Group generated a higher Adjusted EBITA – once again demonstrating our ability to generate strong financial results even in challenging conditions.

RTL Group continues to deliver on its targets for its growth businesses of streaming and content. Our streaming services continued to grow dynamically and passed the 4.5 million paying subscriber mark. In the second half of 2022, we will expand RTL+ to become a cross-media entertainment service. Our content business is also accelerating, with five acquisitions and step-ups in the past six months, major talent deals and 30 planned films for 2022.

We have also made significant progress in executing our strategy to establish national cross-media champions. The integration of RTL Deutschland and Gruner + Jahr is progressing according to plan, and we sold RTL Belgium and RTL Croatia. We expect the competition authorities in France and the Netherlands to decide on the proposed combinations of both Groupe TF1 and Groupe M6, and Talpa Network and RTL Nederland in autumn. We remain convinced that market consolidation is necessary to compete with the global tech platforms.”

All aforementioned transactions further demonstrate Fremantle’s strategic plan to invest in and grow premium production companies and creative talents from around the world.

Following the initial outlook for the full year 2022 dated 17 March 2022, RTL Group communicated on 6 May 2022 that the German advertising market had been weaker than expected in March and April. Since then, current trading and future prospects of most European advertising markets have continued to soften. Due to this development, the effects of the Fifa World Cup in November and December, and numerous external factors – in particular the war in Ukraine, inflation, energy supply and supply chain issues – RTL Group revised its outlook.

The outlook does not reflect the announced consolidation moves in France and the Netherlands as they are still subject to regulatory approvals, but reflects the acquisition of Lux Vide (as at 3 March 2022), Dancing Ledge Productions (as at 6 April 2022) and Element Pictures (as at 10 May 2022) by Fremantle and the sales of RTL Belgium (as at 31 March 2022) and RTL Croatia (as at 1 June 2022)7.

Profitability is expected by 20268.

The full report for the interim results 2022 will be available to download at https://company.rtl.com/en/RTL-Group-interim-results-2022/

1 Adjusted for portfolio changes and at constant exchange rates. Further details can be found in Key performance indicators on page 11 of RTL Group’s interim report 2022

4 Operating cash conversion rate reflects the level of operating profits converted into cash. Further details can be found in Key performance indicators on pages 13 to 14 of RTL Group’s interim report 2022

6 €210 million was already paid in 2021. The following Gruner + Jahr assets are not part of the transaction and will remain with Bertelsmann: DDV Mediengruppe (Sächsische Zeitung), Territory, AppLike Group and G+J’s 25 per cent shareholding in Spiegel Gruppe