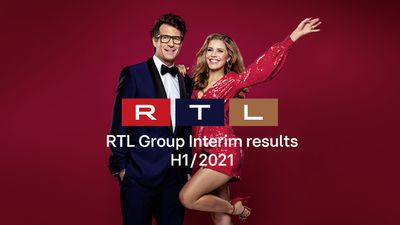 “In the first half of 2021, RTL Group performed strongly. Adjusted EBITA and Group profit were up significantly, driven by the recovery of TV advertising markets and the growth of our content production and streaming businesses. This, combined with active portfolio management, led to a record Group profit of €929 million. Following RTL Group’s strong performance in the first six months, we have raised our outlook for the full year 2021 and now expect an Adjusted EBITA of around €1,050 million including streaming start-up losses and €1,200 million before streaming start-up losses.

Over the past months, we have made significant progress in the execution of our national champions strategy. Major moves in Germany, France, the Netherlands and Belgium will create significant value for RTL Group’s shareholders and put us in a strong position to compete with the global tech platforms.

In addition, we will accelerate the expansion of our content production business, Fremantle – both organically and via M&A – targeting €3 billion revenue by 2025. Fremantle will continue to focus on scripted, non-scripted and increasingly on factual shows and documentaries. The acquisitions of Abot Hameiri, Eureka and Nent Studios so far this year were first steps.

With all these changes, the time has come to reposition our core RTL brand with a new identity and a clear set of principles. We will strengthen RTL as Europe’s leading entertainment brand that stands for positive entertainment and independent journalism, as well as inspiration, energy and attitude. We will rebrand TV Now to RTL+ in Germany in autumn 2021 and will start the international roll-out in 2022.”

RTL Group has raised its outlook for 2021. This outlook assumes that the economic recovery from Covid 19 will continue in 2021, as vaccination programmes progress and no new lockdown measures are put in place.

The full report for the interim results 2021 will be available to download at http://www.rtlgroup.com/results-H1-2021